On Monday 20th of July, Colombia celebrates her official independence from Spain. Therefore, we want to share a bit of history with you about the events that happened 205 years ago.

Before starting telling you what happened that day, it is important to know, if you do not already, that Colombia was part of Spain’s colonial empire in the Americas as part of the Vice Royalty of New Granada which also included what is present-day Venezuela. In the 1800s, Spain was in a precarious position as Napoleon Bonaparte was rolling across Europe and invading a good number of European countries, including Spain, both through military action as well as nepotism. Taking advantage of this situation, patriots in Colombia and all over South America rose in rebellion against Spanish rulers. In Colombia’s case, several cities, such as Cartagena, declared independence from Spain before the actual country itself did so.

Back in 1810, on the 20th of July, a market day in Bogota, the Criollos were planning to ask Joaquin Gonzalez Llorente, a well-known Spanish merchant, to borrow a vase to decorate a table for a celebration in honour of Don Antonio Villavicencio. They were certain Llorente will refuse to lend the vase and his refusal would be the perfect excuse to provoke a riot and force the Spanish Viceroy to hand over the power to the Criollos.

Everything happened as planned in the morning of the 20th and the independence process began. The people in Bogota took the streets to protest against Spanish arrogance, while the leaders of the Criollos went to negotiate a peaceful solution with the Viceroy Amar y Borbón to permit the creation of a local council. This was just the starting point of a series of events that eventually led Colombia to become an independent republic in 1819. 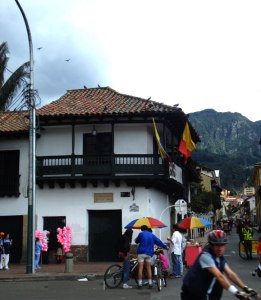 It took us around 9 years to become an independent country, it was a long journey for our Colombian patriots.
If you want to learn more about this particular event and you are in Bogota visit the museum “La Casa del Florero” located in the main square “Plaza de Bolivar”.